After a pleasantly warm last end of winter, we had a chilly and rainy beginning of spring. 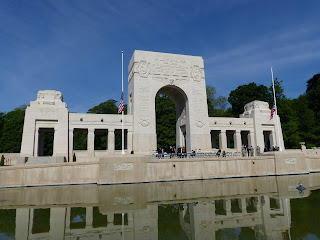 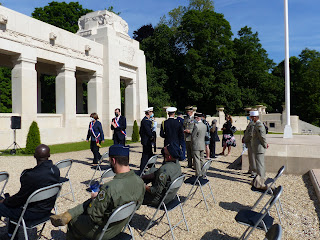 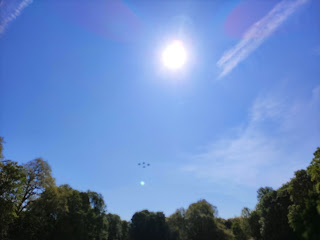 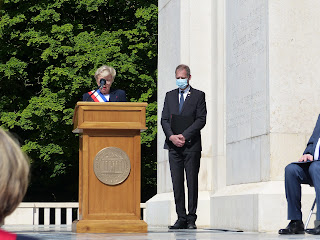 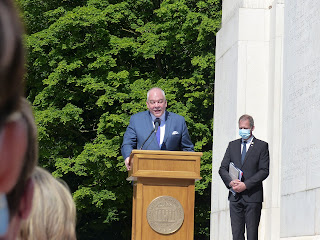 Sunday, May 30, was the day Americans in France were invited to celebrate Memorial Day, since it is not a French holiday and Monday is not a day off. It was a glorious morning -- blue sky, blazing sun. Paul and I drove to Marnes-la-Coquette to attend the ceremony at the Mémorial de l'Escadrille Lafayette once again. Since I was representing AARO, even though we had not sent a wreath, we were in the widely spaced seats just in front of the monument. There were only 30 seats this year because of Covid-19 restrictions still in effect, here. Masks are still de rigueur, even outdoors, too. As usual it was a lovely ceremony, shorter than usual. It started at 10:30 with a flyover of four jets (2 Rafales from the Escadrille Lafayette based in the south of France and 2 U.S. planes from Utah). The mayor of Marnes-la-Coquette gave her two distinct speeches, one in French, the other in English. The Chargée d'Affaires, Brian Aggeler, spoke on behalf of the Embassy, but the French and American generals did not speak this year. There was a tiny honor guard, no live music for the national anthems and taps. The speeches were followed by the presentation of the wreaths -- not as many as usual. The event was over by 11. Still, I wouldn't have missed it. It's an honor and a pleasure to attend.

The books ("Unmute Yourself, Girlfriend"), arrived! The release date was supposed to be July 4, but they sent out advance copies. There are a few glitches in these advance copies and the publisher is replacing them with the final edition, or so I've been told. When I've got confirmation that the glitches are history, I'll repost the link to order. The ones I've ordered are for my kids.

Unmute Yourself, Girlfriend is ready for pre-orders 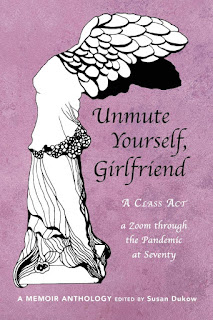 I have already told you that my high school classmates have been meeting on Zoom since May 2020. We've been getting closer and closer since the 40th reunion back in 2008, first with an email list, then in a private Facebook group, and spurred on by the Covid-19 pandemic, on Zoom.

I've already told you that some of us, 43 to be exact, have written an anthology of our memoirs: Unmute Yourself, Girlfriend.

Quoting from a friend's publication notification:

"A Woodstock Icon, a Judge, a Columbine survivor, an Archaeologist, a Midwife/Pot Farmer/CEO, a Sex Therapist, Accountants, a Linguist, Dancer, a Molecular Biophysicist, Artists, a Film Production masochist, a Ballistic/Engineer Scientist, a Topless Dancer who became a Nurse, numerous Teachers, Writers and Doctorates & many Wives and Mothers - all well imagined and fully realized women, these are our Authors.

"Unmute Yourself, Girlfriend will be released July 4th 2021 and is now available to pre-order in either print or e-book. Please visit our page at: BookBaby.com

"All the profits from the sale of this book will go toward scholarships at our alumnae association at The Philadelphia High School for Girls. It is our gift to Girls’ High for what it took many of us fifty-plus-years to realize - that there were influences bestowed upon us by just being Girls’ High girls - even as some of us, including me, were kicking and screaming at the time. The stories are from the straight-A-students to the summer school attendees… varied and as unique as they all are – the forty-three seventy-year-old-women who were once teenagers together in an all girls’ school 1964-68 and who continue to share their tears & laughter…

"We have also started a blog and we’d love to see you there: Unmute Yourself, Girlfriend

I may be posting more on the Unmute Yourself, Girlfriend blog -- at least for serious thoughts.
.
Posted by Ellen Lebelle No comments:

Another blog to read

I've mentioned that during this pandemic year a group of high school friends have been meeting and sharing stories in almost bimonthly Zoom meetings. In fact, some of us went so far as to write and the book, Unmute Yourself, Girlfriend, will be published, soon. As soon as I have the link, I'll let you know.

In the meantime, we have a blog but it's not ready yet. I have just deleted the link. It's not my blog; it's ours and I will repost the link very soon.

Why "girlfriend"? It's Girls High. The official name of the school is the Philadelphia High School for Girls. We are the 212, the 212th graduating class, the class of 1968.

My second shot of Pfizer vaccine was yesterday, April 30. Done. No serious side effects -- just a sore arm and it's no longer sore this evening. Of course, for the full effect, I have to wait two weeks. That is not a big burden.

I think I mentioned that some of my Girls High classmates have written a book. It all started in our mini reunions on Zoom a year ago as we started dealing with the Covid-19 pandemic. We talked: what we were doing or no longer able to do; politics, as we got ready for the 2020 elections; George Floyd and Black Lives Matter; our families; and anecdotes. As the lockdowns loosened after the first wave, we then hunkered down again in the fall with new lockdowns. We kept talking and, from memories of who we were 50 some years ago, what we felt then, who we are today, and what this pandemic with Zoom meetings has meant to us, forty-three of us contributed to this book "Unmute Yourself, Girlfriend". It's not yet ready for the pre-publishing hoopla-la. I'll give the link when it's ready.

I'm in France and these periods of restrictions are called confinements, here. We are now entering the de-confinement, which is in stages from Monday, May 3, to mid-June. It's gone much faster in the U.K. and in U.S. We looked at the calendar and determined we might get on the road after May 19. Since we'll stay at a hotel, we need to have the possibility to have dinner at the hotel. We have some appointments and will have to wait a few days past the 19th. Before the end of the month, though, we should be off! It's exciting!

This is not what I consider a public blog. They are more like the letters I used to write home when I first came to France - before calling became cheap enough to call home and long before the Internet. -- Keep in touch! Ellen

Ellen Lebelle
An American in France for a long, long time. A wife and mother of 4 enjoyable adults. A retiree, former technical writer, former English teacher.